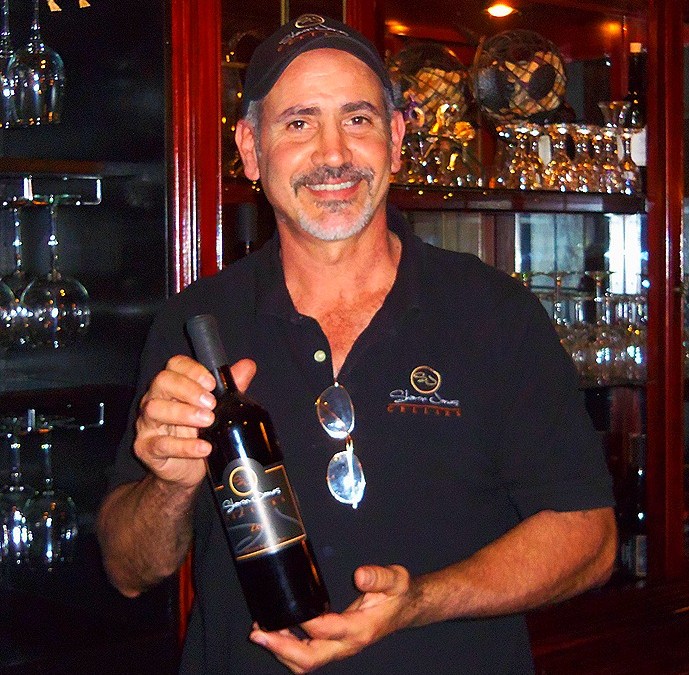 Sometimes the road less travelled can result in delightful surprises. That was the case during a recent visit to Punderson State Park in Newbury, Ohio.

We had picked up our daughter from Kent State and had dinner and spent the night at the lodge. In the morning we hiked the Iroquois trail and then engaged in a spirited nine holes of disc golf. When we returned to the lodge just after 2:00, we were told the restaurant had closed.

Skittering down the road in search of a restaurant that might work for our vegan daughter, we discovered Zeppe’s Tavern and Pizzeria, which had a great outdoor patio. Right across the street was what looked like a brand-new winery: Sharon James Cellars, 11303 Kinsman Road, Newbury, Ohio, (440) 739-4065.

Following our afternoon meal in the Indian Summer sun, we stopped in to explore this new addition to the Ohio wine scene. We were ushered into the parking lot by an energetic young lady in a grape costume.

Inside the attractive and modern building we were greeted by Jim Sciaulino, the “James” of Sharon James Cellars. Jim and Sharon Sciaulino are Mantua natives who decided to pursue their dream of winemaking and opened the winery in August after renovating a former restaurant building.

The couple planted a vineyard six years ago and it includes Chardonnay, Riesling and Cabernet Franc. Their new vineyard, located at the site of the tasting room, includes Vidal, Cabernet Franc and Traminette.

The tasting room is beautiful with ample room at the bar, a nice dining area and some comfy chairs. When the Green Dragon asked to start with the Vidal, I was surprised to see Jim go over to the tap.

Punderson & Sharon James 008Sharon James is one of the only wineries in Northeast Ohio to serve wines on tap. During our visit the whites were on tap, but the reds were from the bottle.

Since their own grapes aren’t at full production level, Sharon James still has to buy their grapes. The grapes are all from Ohio with the exception of Steuben and Riesling (from Pennsylvania) and Barbera from California.

I started with Mary’s Wild Irish Rosé, a rosé made with Steuben grapes. The wine is dry and refreshing. Our daughter tried the Catawba and enjoyed its perky sweetness. It had a nice floral bouquet.

My next selection was Diligence (all the wines are named after a virtue), which is a Cab Franc wine. This was cranberry in color with a medium body. This was a very good Ohio Cab Franc – not as heavy as a Cabernet Sauvignon with an enjoyable pop of berry flavors.

We then tried Zeal, which is a California Barbera finished in a port style. The wine has a full body. Although it isn’t fortified, it had the Madeira style taste. This wasn’t a favorite.

Jim showed his skill as winemaker by then mixing the Zeal with the Cab Franc Diligence. This was superior to the individual wines, adding some body to the Cab Franc, but cutting the strong flavor of the Zeal. Jim said he may plan on bottling this in the future.

My last tasting was the Acceptance Riesling. As a real fan of Riesling, I found this to be a bit thin but a worthy effort.

Sharon James has a first class winery building that includes dining, a tasting room, production facilities and a great patio area. The wines are enjoyable and hold even greater promise for the future.

There are no upcoming events at this time.