Wine on tap at Sharon James Cellars in Newbury Township 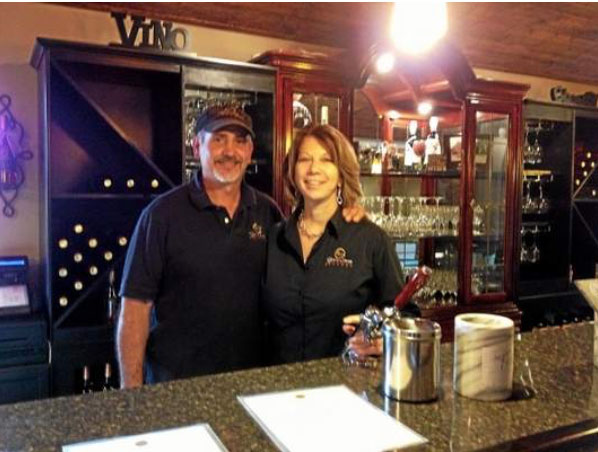 The idea of opening Sharon James Cellars took root in the most appropriate of circumstances — in conversation over a glass of wine.

So say Jim and Sharon Sciaulino, owners of the establishment in Newbury Township.

The couple, who live in Mantua, enjoyed the beverage to such an extent that in 2004 Jim took up the hobby of producing his own variety.

After several years experimenting with the process, an original product the couple was proud to serve emerged.

Jim, originally from Richmond Heights, retired from his job in the auto industry and began devoting more time to wine making.

After making a decision to dive into a winery operation, finding a location was the hardest part, said Sharon, who grew up in Maple Heights.

A suitable locale with a septic system presented a challenge until the couple came across a property near the intersection of Auburn Road and Route 87 that had been closed for eight years.

Built in the 1930s, the building originally housed a home and restaurant, and later, several other establishments.

Though the roof had been leaking for years, a portion of the ceiling had collapsed and floors were buckling, the couple recognized its inherent character and potential.

Most of the work, including laying floors, hanging drywall, painting and repairing the plumbing to make the transformation into a clean, modern and attractive building was completed through Sharon and Jim’s handiwork.

The winery, which opened in 2012, is separated into distinct areas but still allows for comfortable traffic flow. Attractive tan, stucco walls are showcased above mahogany bead board.

Sleek tables and chairs open to accommodate larger parties but seating for a more intimate experience also is available.

Outdoors overlooking trees and green open spaces is a patio with seating for about 60 patrons.

When contemplating names for the winery’s offerings, the couple decided to assign a virtue to each.

Compassion is comprised of dry, un-oaked Chardonnay that is crisp and light with a summer fruit aroma and flavor. Eloquence features Vidal grapes from the Lake Erie region and is described as having citrus and pear flavors.

“This year will be a challenge,” she said. “I got what I can from Ohio (but also) sources from California, Washington state and Michigan. Some of the heartier red grapes are from the West Coast.”

Sharon James Cellars is one of Northeast Ohio’s only wineries to serve wine varieties on tap, according to the business’ web site.

Being introduced are a few beers from Chardon BrewWorks and Little Mountain Brewery in Mentor.

“The reason we decided to do it is a lot of couples come in and someone is looking for a beer and we wanted to accommodate them,” Sharon said. “Our intent is to stay a winery.”

With the assistance of niece Kelsea Sciaulino, menu items are available and include appetizers as well as a salad, sandwich and entree which change weekly.

Sharon noted that area groups have been very supportive of their enterprise and the winery often plays hosts to Rotary clubs and others. Events such as Yoga in the Vineyard and art classes also are offered on site.

In all, they’re pleased with the progression.

“We’ve seen a steady increase,” Sharon said. “It’s really great to see the customers who come back. They come here, hug us … they’ve become like our friends. I want (people) to come here, have a glass of wine and relax … just have a nice time.”

There are no upcoming events at this time.